Have you ever saved a seat for someone?  Some of my earliest memories are of me saving seats for my school friends.  When we would have an all-school assembly, my friends and I would agree on which section of the gym we were going to sit in, and whoever made it there first would save seats for everyone.  If I made it there first, I would sit anxiously awaiting their arrival.  My head would turn back and forth in an attempt to seek out, spot, and wave my friends over to where we were sitting.  The excitement of being able to sit with friends and the wonder if they would still come and sit with me were enough to send me over the edge.  In the end, they would show up, my nerves would settle, and I would relish in the fact that they chose to show up.

As I got older, my friendships became more complex.  Group dynamics came into play, and even when we made plans to sit together, sometimes those plans would change and my friends would sit with someone else.  I had to pretend that my feelings weren’t hurt and that I understood their choice to sit elsewhere, but deep down I remember feeling abandoned and not good enough.

Throughout my life, I have been saving seats for people.  Sometimes in the literal sense, but mostly figuratively.  Somehow along the way, I engaged with others in friendships and relationships in a way that gave them permission to make plans to sit with me, but never show up.  It wasn’t until very recently that I realized that I’ve been saving seats for people that don’t want to sit with me.  We make plans, I get excited, and I show up and save them a seat.  I sit around patiently waiting, looking around in hope to see them coming, but they never show up.

Now, don’t get me wrong.  I have some people in my life that always show up.  They even come before I ask.  I’m not talking about these people.  I’m talking about the people that I pour into that always take and never give.  The people that have one foot in the door and one foot out-that never want to come all the way in.  They want me to make space for them, be there for them, and wait for them, but they never want to sit down with me.  Have you ever saved a seat in your life for someone that never had any intention of actually sitting down with you?

What I realized about saving a seat for people that have no intention of sitting down with you is that you could spend your whole life waiting for them to come and sit, and they would never show up.  They want you to sit alone.  You sitting alone and saving that seat for them means that no one else is going to sit with you, and they will always have the OPTION to show up.  The reassurance that they receive by you saving them a seat gives them permission to not show up.  They know that you’re going to be waiting patiently and holding them a spot, so they continue doing what they’re doing because they think they have all the time in the world to come and sit with you.

I don’t know about you, but I don’t want to be anyone’s maybe.  What I learned about saving people a seat in my life is that if someone truly wants to be in your life, you won’t have to save them a seat.  They will show up on time, every time.  They will want to sit with you, and they will make the effort and show you with their actions.  People that want to be in your life will show you, not just tell you, and if they ever ask you to save them a seat, they will always show up. 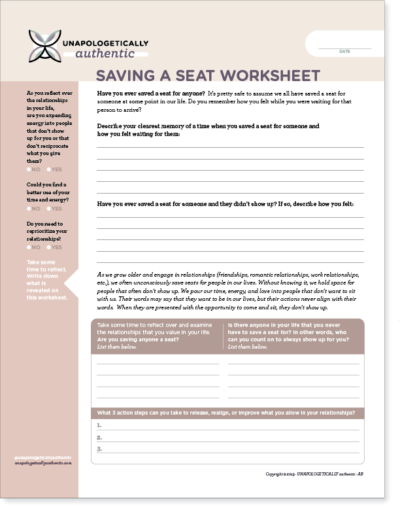 “Know the difference between those who stay to feed the soil and those who come to grab the fruit.”